From post-docs to next generation scientists

An international symposium on new sequencing technologies at MPIPZ Köln 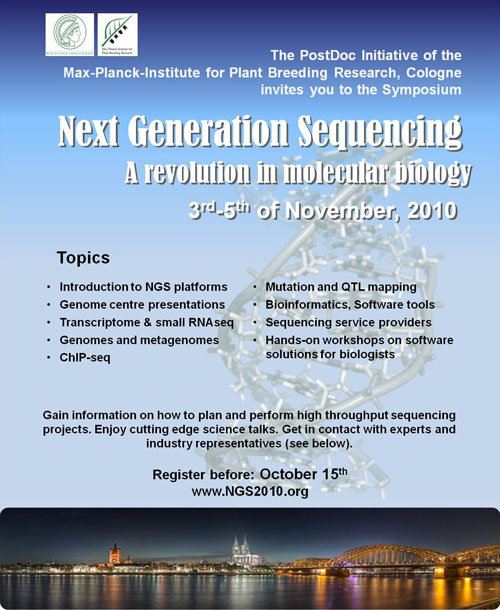 Three years ago the PostDoc initiative (PIM) at the MPIPZ came into life. This group of PostDocs meets regularly and organizes courses from PostDocs for PostDocs, with the aim to support the scientific development of young scientists by taking active initiative. PIM promotes and organizes in-house courses ranging from technical to personal development training. This year, motivated by the directors of their institute, the initiative took the challenge to further extend their projects and organized a Symposium together with the Genome Center of the MPIPZ about a revolutionizing topic in Molecular Biology: Next Generation Sequencing.

What was planned to be a small workshop for institute members developed into a fully grown symposium with around 300 participants from all over Europe as well as far away visitors from India and South Africa, 14 sponsoring companies and several experts in the field as invited speakers.

For two and a half days, participants could enjoy talks from researchers and companies working on the field of Next Generation Sequencing. The open and lively discussion allowed biologists and bioinformaticians to discuss the sequencing techniques which revolutionized biological research in the recent years and keep scientists challenged due to the sheer masses of data produced in a single experiment.

During breaks, participants had fruitful discussions on the topic and could inform themselves about the services provided by a number of companies at the booths which gave the lecture hall building the appearance of a science trade fair.

Feedback from several internal and external participants was very positive, with many acknowledging the enhancement of their knowledge about Next Generation Sequencing techniques, ranging from the experimental design to practical issues like time and costs. Finally, the meeting opened up possibilities for starting new collaborations among institutes and scientists.